When MCC stands for motorcycle crash and most common cause

27 y/o RHD female presented via EMS. Patient was a helmeted passenger on a motorcycle that was hit by a car immediately prior to EMS arrival. Upon EMS arrival, the patient was lying in the supine position with an obvious deformity to her left upper extremity. Patient reports they were t-boned and she extended her left arm prior to the impact. She currently complains of severe, constant, diffuse left shoulder/arm pain that is made worse with movement by other people. She states that she is unable to feel her left hand and arm and can’t move it herself.

Msk: Left clavicular deformity with overlying hematoma and ecchymosis. Deformity of the left elbow with laceration overlying the joint. Multiple

deformities of left fingers 2-4
Neuro: Insensate from C4-T1 in the left upper extremity and had no motor function of the left arm. 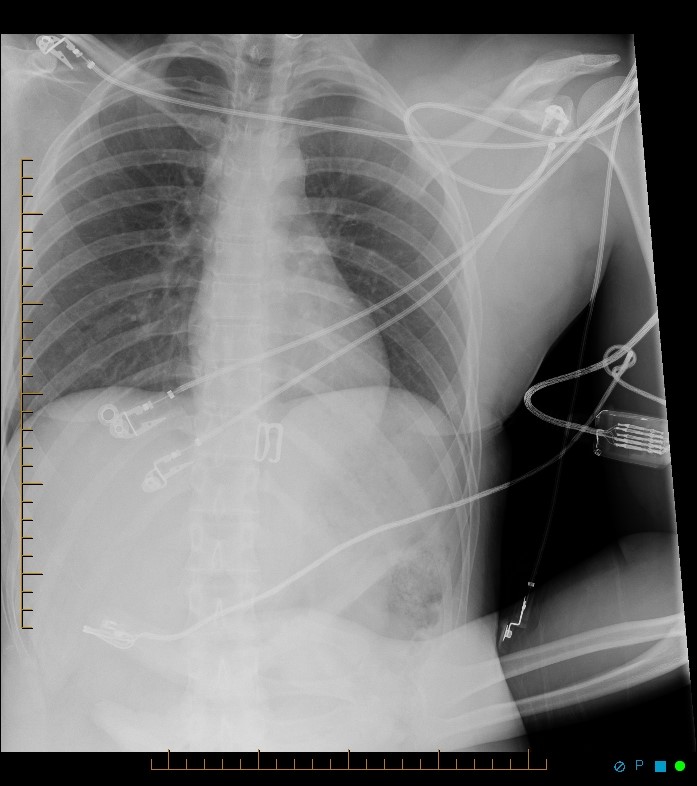 In the emergency department the patient was diagnosed with left extremity injuries including: brachial plexus injury, CSF leak at C7-T1, scapular fracture, subclavian artery dissection, open distal humerus fracture, and hand fractures. Neurosurgery, vascular surgery, trauma, and orthopedic surgery were consulted in the emergency department. The patient’s left elbow was irrigated and splinted in the ED. She was given ancef, tdap, pain medications and then admitted to the ICU.

Subclavian injuries in the setting of blunt trauma are reported in less than 1% of all arterial and chest related injuries. Subclavian artery dissections are often evaluated using CTA (Please see Figure 2 below). Doppler ultrasound can be used to assess the ipsilateral radial pulse to ensure sufficient collateral blood supply. In the past, subclavian artery injuries were approached with medial sternotomies and high lateral thoracotomies. However, newer and less invasive endovascular techniques have shown better outcomes. Treatments include balloon angioplasty, stenting, and bypass grafts. Anticoagulation therapy remains an area of variable practice, and may be of particular interest to the emergency medicine physician. Our patient’s vascular surgeon noted that she had excellent reconstitution of the axillary artery on CTA and biphasic doppler signals in the radial and ulnar arteries. She was not placed on anticoagulants and follow-up with vascular surgery 4-6 weeks post-discharge was recommended.

The incidence and severity of traumatic brachial plexus injuries (BPI) in the US population is unknown. However, one retrospective study at a Level I Trauma Center in the US had an incidence of 0.26% traumatic BPI from 2005 to 2016. Traumatic brachial plexus injuries are most commonly sustained during motor vehicle crashes or contact sports. The typical mechanism is rotation of the neck ipsilateral to the injury with traction contralateral to the injured extremity. BPI diagnoses are made with MRI (see figure 3 for our patient’s diagnostic imaging), CT myelogram, and/or electromyography (EMG). Apart from conservative management, surgical options include neurolysis, nerve repair, use of nerve grafts and nerve transfer. Surgery within the first 3 months is generally advised against as it could interfere with any possible spontaneous nerve recovery. Emergent operative intervention is usually indicated when there are open penetrating injuries. If after 3 months there are no clinical signs of functional restoration, surgical intervention is recommended. Our patient’s neurosurgeon noted that there was no significant neural compression caused by the CSF leak, and the patient did not require a cervical collar. An outpatient EMG was scheduled for 6 weeks post-discharge without any immediate surgical intervention. 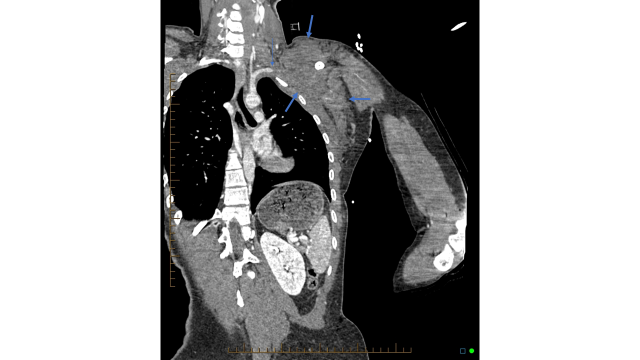 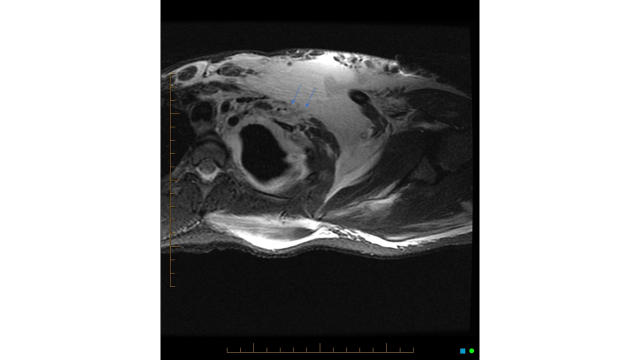