Back From The Dead - The Emergency Medical Minute

Back from the Dead

55-year-old male reporting chest tightness 8 out of 10 that began right before getting in the shower just prior to arrival to the ED, has been persistent and is now at a 5 out of 10. He took some aspirin but nothing else to treat it, never had this before. Before getting into the shower, he had to vomit because of chest tightness. He had associated diaphoresis and dyspnea.

6:46pm: Lost pulse and consciousness, CPR started and performed for 2 mins then shocked into sinus tachycardia from a V. fib arrest rhythm. Amiodarone bolus and zofran given (patint with episodes of emesis while leaning over bed into a bucket—unlikely aspiration). Nitro for chest pain, morphine for chest pain, heparin bolus, and drip.

7:13pm: Cardiologist called back and accepted patient to cath lab.

This is a 55-year-old male patient who presented with chest tightness with episode of emesis and diaphoresis. Initial EKG was normal, but patient went into pulseless Vfib requiring shock and amiodarone while in the ER. He was initiated on amio gtt and heparin gtt and taken to cath lab urgently. His second EKG showed STEMI anterior leads. He takes metamucil at home daily, dad had quadruple bypass and his younger brother has had stents. Patient had not had any discomfort prior to today. He underwent LHC receiving LAD and L. Circ stenting. His echo showed reduced EF of 20-25%. He was offered LifeVest but denied related to cost. He was discharged home in stable condition with spouse at bedside. 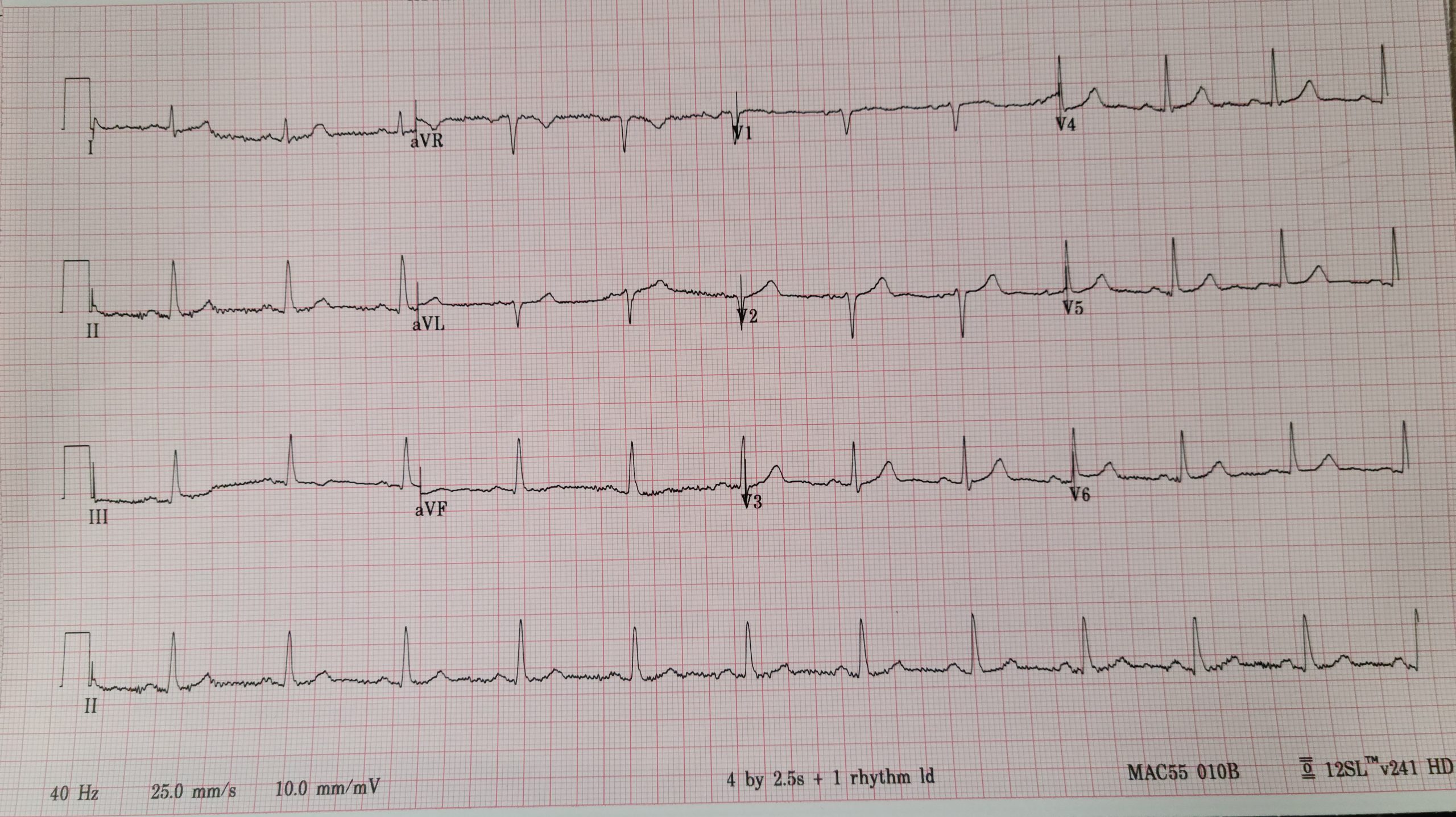 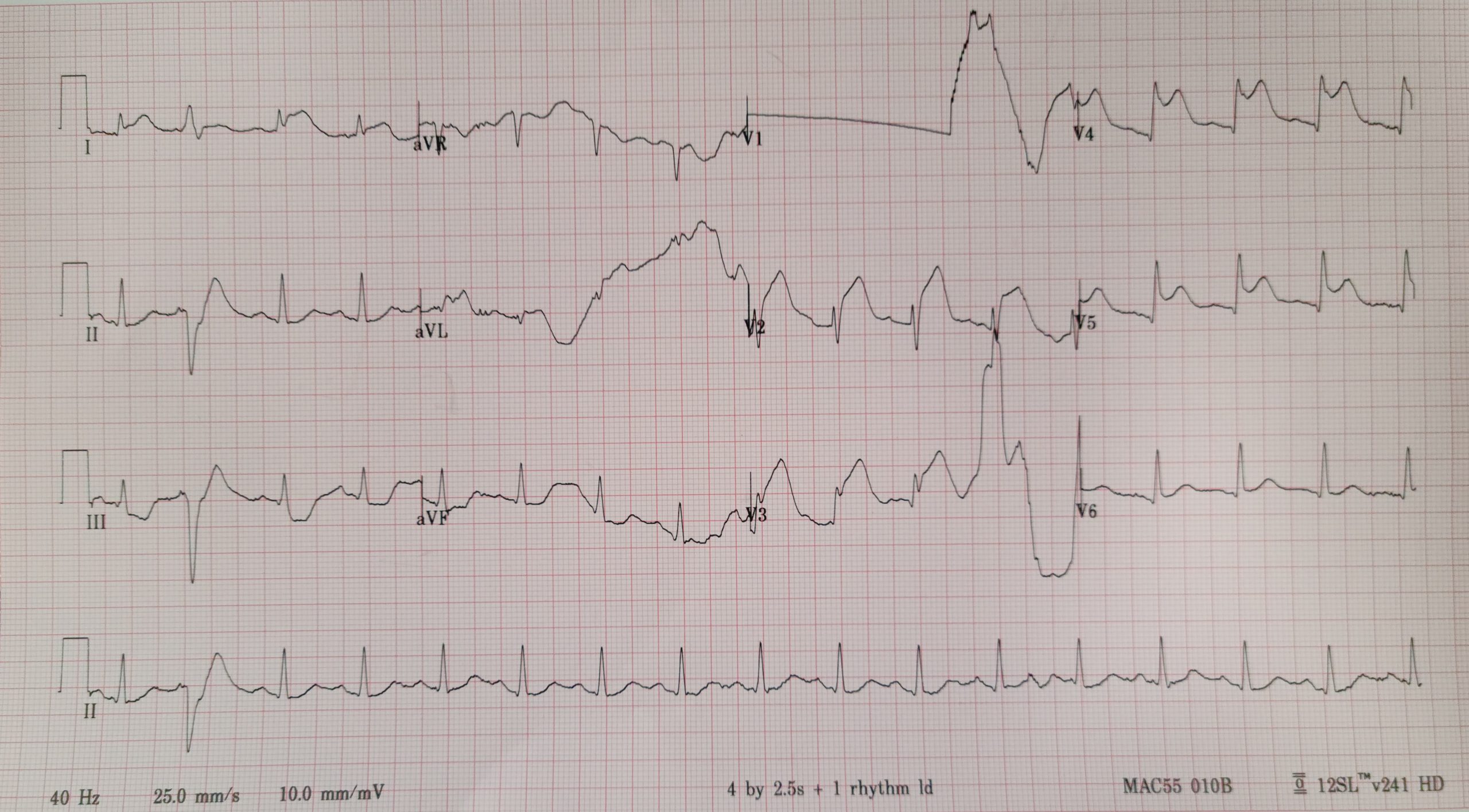 Ventricular Fibrillation (VFib) is one of several types of cardiac arrhythmia that originate within the ventricles, along with ventricular tachycardia (VT), premature ventricular contractions (PVCs) and ventricular flutter. VFib is the completely disorganized depolarization and contraction of the ventricular myocardium, which leads to ineffective ventricular pumping activity. VFib is typically characterized by a ventricular rate greater than 300 beats/minute (normal ventricular rate 100-180 beats/min) without recognizable P waves and QRS complexes identified on electrocardiogram (ECG). Primary VFib is sudden onset, often without any prior indications, and is typically caused by acute ischemia whereas secondary VFib occurs after an extended period of worsening hemodynamic conditions caused by left ventricle failure or circulatory shock.

VFib is a life-threatening arrhythmia due to its extremely negative effect on cardiac output. It is the most common cause of sudden cardiac arrest and death. VFib can be the initial arrhythmia leading to cardiac arrest, or it may arise from a conversion of VT, asystole, or pulseless electrical activity during the arrest. Three to twelve percent of all myocardial infarctions (MIs) report incidence of VFib during the acute phase, with those experiencing complete coronary occlusion, anterior wall infarction, atrial fibrillation (AFib), and preinfarction angina being more prone to develop VFib over their disease course. VFib has been associated with electrolyte abnormalities, congenital heart defects, hyperthermia, cardiomyopathies, hypoxia, alcohol use, and genetic predisposition.

VFib is a medical emergency that typically presents with the patient already in cardiac arrest. There may be reports of the patient experiencing chest pain, dyspnea, dizziness, and/or syncope followed by loss of consciousness. Diagnosing VFib arrest requires checking for a pulse to confirm that the patient is in cardiac arrest, and an ECG to identify which arrhythmia is occurring. VFib is a distinctive rhythm characterized by the presence of fibrillation waves of varying shape and amplitude, no identifiable P waves, QRS complexes, or T waves, and a heart rate ranging from 150-500 beats per minute.

VFib arrest management should follow the most recent ACLS guidelines which include beginning high-quality CPR, unsynchronized defibrillation, epinephrine, and antiarrhythmic medications. This approach requires collaboration and is best implemented with a team. In any cardiac arrest, CPR at a rate of 100-120 BPM should begin immediately. If no advanced airway is present, use BVM to deliver breaths at a 30:2 ratio. Waveform capnography showing low or decreasing PETCO2 indicates poor CPR quality.

While CPR is maintained, defibrillation pads should be attached to the patient and IV access should be established. When VFib is identified on the monitor, deliver a 120-200J biphasic shock then immediately resume chest compressions for 2 minutes. After an additional 2 minutes, if VFib is again identified at the checkpoint, administer a shock and epinephrine. Epinephrine can be given every 3-5 minutes. After another round of 2 minutes of CPR followed by VFib on the monitor, shock and give amiodarone or lidocaine as an antiarrhythmic agent.

If the rhythm changes from VFib to another pulseless rhythm, then ACLS protocols pertaining to that arrhythmia should be followed. If Return of Spontaneous Circulation (ROSC) is achieved, ACLS provides a guideline for adult post-cardiac-arrest care. The algorithm prioritizes airway management, if needed, with an Endotracheal Tube (ETT). Advanced airways such as Laryngeal Mask Airway (LMA) or King Laryngeal Tube (King LT) are additional options, with less evidence in the literature for their outcomes compared to ETT. Begin respirations at 10 breaths/minute. Respiratory and hemodynamic parameters should be managed. Goals include a systolic blood pressure above 90 mmHg or mean arterial pressure of 65 mmHg and a CO2 titrated to 35-45 mmHg. Treat hypotension with crystalloids and pressors. At this point, obtain ECG. Evaluate the need for emergent cardiac intervention including STEMI, cardiogenic shock, or if mechanical circulatory support is required.

If the patient is comatose, begin targeted temperature management (TTM) as early as possible. Additionally, obtain CT Head and EEG monitoring. TTM is necessary to maintain neuroprotection and improve patient outcomes and should be promptly initiated. Aim for 33-36°C and do not use external temperature monitors as they are unreliable. Cooling can initially be done with surface cooling using ice packs and cooling blankets. Supplementary cooling infusions or endovascular cooling catheters are used secondarily. Any shivering may be reduced with sedation and/or paralysis. TTM requires continuous neurologic evaluation and monitoring of electrolytes and coagulation studies every 4 hours. Once TTM has been initiated, or the patient can appropriately follow commands, transfer to the intensive care unit for continued diagnostic workup and management.

The rate of survival after cardiac arrest is approximately 10%. This survival rate has improved with the implementation of standardized procedures outlined in ACLS including targeted temperature management (TTM) and aggressive efforts for neuroprotection. Notably, “every hour of delay in TTM after ROSC increases patient mortality by 20%.” For out-of-hospital ventricular fibrillation and cardiac arrest, increased time-to-ROSC is associated with decreased short and long-term survival. Those who survive post-cardiac arrest have an increased risk of neurologic dysfunction, brain injury, decreased quality of life, and death. Therefore, prompt treatment must begin to maximize patient outcomes and long-term survival.

Prognostication for cardiac arrest begins at 72 hours after return to normothermia with TTM or 72 hours after cardiac arrest. At 72 hours predictors of poor prognosis include absent pupillary response or corneal reflex, no withdrawal to pain or extension to pain, and myoclonic status epilepticus. Predictors for good prognosis include recovery of reflexes within 48 hours, return of purposeful response within 24 hours, hypothermia at time of arrest with emersion, and young age.