68 year old female with past medical history of coronary artery disease status post stent, hypertension, hypothyroidism, hyperlipidemia is brought in by EMS as a stroke alert after being found unresponsive in bed by family prior to arrival. Last known normal is 10pm last night when husband left for work. Patient had pinpoint pupils on EMS arrival, prompting administration of Narcan with no improvement of mental status. EMS then noted patient’s right pupil to be dilated in route.
History Source: ems provided history.
History limited/modified as patient is unresponsive.
Unable to obtain ROS because: unresponsive.

Neurology at bedside agrees with intubation and then CT. CT shows large right posterior intraparenchymal hemorrhage with cerebral edema and with midline shift and signs of uncal herniation and midbrain compression. 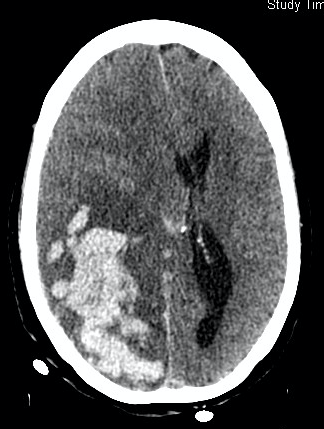 There is a large intraparenchymal hemorrhage in the right temporal, occipital, and parietal lobes, estimated at 9.4 x 4.2 x 6.4 cm for an approximate volume of 126 mL volume. There is substantial surrounding vasogenic edema with leftward midline shift of 17 mm as measured at the level of the septum pellucidum. There is effacement of the right lateral ventricle and third ventricle. There is uncal herniation with effacement of the ambient cisterns. The midbrain is compressed. No evidence of entrapment of the left lateral ventricle at this time. Subarachnoid hemorrhage is noted over the right temporal convexity. There is also a right subdural hemorrhage posteriorly extending towards the tentorium and measured at approximately 6 mm.

CTA head and neck without aneurysm or malformation.

Neurosurgery consulted, agreed with BP goal 140-160, head of bed at 30 degrees, cardene drip. Taken to the OR by neurosurgery.

In OR: R craniotomy with evacuation of subdural blood and R occipital intraparenchymal hemorrhage.

Due to unfortunate poor prognosis without hope of meaningful recovery hospice evaluation was completed. The patient was accepted to inpatient hospice. Palliative care team was instrumental in transition to hospice care. Patient died after supportive care was removed.

Intracerebral hemorrhage (ICH) is a neurological and medical emergency. It is the second most frequent type of stroke, behind ischemic stroke, with 40,000 to 67,000 cases per year in the United States. ICH can be due to a variety of underlying pathologies with the most common being hypertension, cerebral amyloid angiopathy, saccular aneurysm rupture, and cerebral vascular malformation. Demographic risk factors for ICH include Asian ethnicity and older age, while modifiable risk factors include hypertension, alcohol intake, sympathomimetic drug abuse, low levels of serum cholesterol, smoking, and anticoagulation. Rapid recognition and treatment of ICH is essential to prevent neurologic deterioration, disability, and death.

The diagnosis of ICH is based on physical examination and diagnostic imaging. Clinical suspicion should be high in the setting of a patient with acute onset and worsening neurologic symptoms accompanied by vomiting, headache, hypertension, or decreased level of consciousness. Ischemic stroke and hemorrhagic stroke are indistinguishable by clinical exam only and therefore diagnostic imaging with either CT of the head or MRI of the brain are necessary to differentiate. Most often, diagnosis will be made with a non-contrast CT of the head as it is a quicker, less-expensive, and more readily available resource. While MRI of the brain is better to differentiate the timing of onset of the hemorrhage, CT and MRI have been shown to be equivalent in diagnosing acute ICH. The patient’s history, blood pressure, past medical history, and location of the ICH can provide clues to the etiology of the bleed.

Clinical presentation of ICH varies and depends on the location of the hemorrhage. The most common locations for hemorrhage and some associated symptoms are listed below:

As mentioned above, a hemorrhagic stroke may present many different ways depending on the location of the injury. Before imaging can be done, an initial evaluation of the patient’s airway, breathing, and circulation must be performed. Any airway compromise should prompt intubation. Once imaging has confirmed the diagnosis of a hemorrhagic stroke, it’s vital tissue plasminogen activator (tPA) is withheld. Blood pressures are frequently elevated with hemorrhagic strokes and current best practice guidelines advise lowering pressures with short acting agents, like Labetalol, to a systolic pressure below 140 mmHg. Seizures present in 14% of ICH and they should be treated with antiepileptic drugs, however use of prophylactic antiepileptics is not recommended as it may actually worsen outcomes.

Thrombocytopenias or coagulopathies should be treated in an attempt to stop or slow the bleeding. Platelets can be transfused if initial studies show levels ranging from 50,000-100,000 plt/microliter. Coagulopathies related to warfarin, DOACs, or heparin can be reversed with their associated reversal agents. Both neurology and neurosurgery can be consulted for more definitive management and any indicated acute interventions. High intracranial pressure (ICP) may require a craniotomy or shunting at neurosurgery’s discretion. Additionally, large hematomas may require evacuation to reduce or limit mass effect and lower ICP. Patients suffering from an ICH will almost certainly require admission to the hospital and continued management by neurology and/or neurosurgery after initial stabilization.

Other seemingly small but paramount features of ED management include decreasing intracranial pressure, blood pressure control, and oxygenation optimization. Placing the head of bed to 30 degrees is a quick, easy way to decrease intracranial pressure in these patients. While managing elevated blood pressures is necessary, hypotension should be strictly avoided. Systolic blood pressures below 90 mmHg have been shown to increase mortality in patients with ICH. Optimizing oxygenation to avoid both hypoxemia and hyperoxemia should be prioritized as this significantly affects mortality rate. In one study, 6% (22/365) of the admitted patients who were initially hypoxic became hyperoxic and 23% (85/365) became normoxic. The patients who became hyperoxic had a case-fatality of 81% compared to a case fatality of 51% in the patients who became normoxic. The case-fatality of hypoxic patients that remained hypoxic was 64%. Hyperoxemia is also fatal and failure to correct admission hyperoxia was associated with higher in-hospital case-fatality. Of the initially admitted hyperoxic patients, 15% (21/138) remained hyperoxic and had a case-fatality of 82%. This was compared to 49% (67/138) who became normoxic and had a case-fatality of 46%.

Outcomes in patients suffering from hemorrhagic strokes is entirely dependent on the extent and location of the hemorrhage. Overall, the 30 day mortality associated with ICH ranges from 37.6% to 52%. One study reported a case fatality rate of 40% at one month and 54% at one year. For patients who survive and are eventually discharged from the hospital, regaining functional independence can be very difficult. About 12-39% of survivors achieve long-term functional independence after discharge. Larger hemorrhages typically have worse outcomes. Studies have shown ICH located in the thalamus, lobes, or infratentorial regions had the highest 90-day mortality (OR of 1.97, 1.95, and 2.45 respectively), while permanent disability was most often seen with hemorrhages involving only the posterior internal capsule. Patients are at higher risk for more significant intracranial hemorrhages if taking warfarin versus a DOAC. Along with this, older age and prior CVA’s were also linked to increased morbidity and mortality.