16-year-old male brought in by EMS for seizure-like activity for 15 minutes while at his uncle’s house. On arrival to scene, EMS noted tonic clonic activity was noted in all extremities by EMS and 5mg IM Versed given by EMS, 5 minutes later seizing aborted. EMS notes family denied seizure history in past. They denied fever. They stated that he was in his normal state of health up until this morning.
No medical or surgical history and no illicit use per EMS report from family 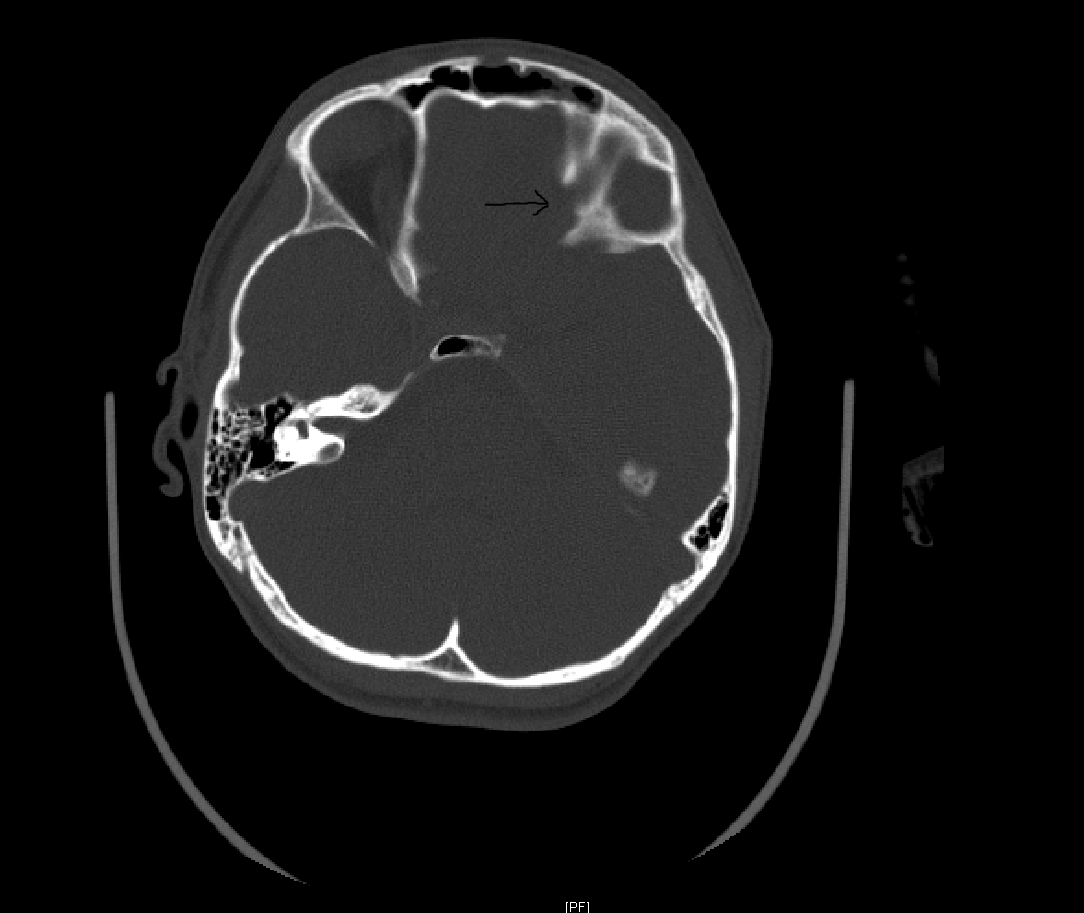 There is dehiscence of the anterior wall of the left maxillary 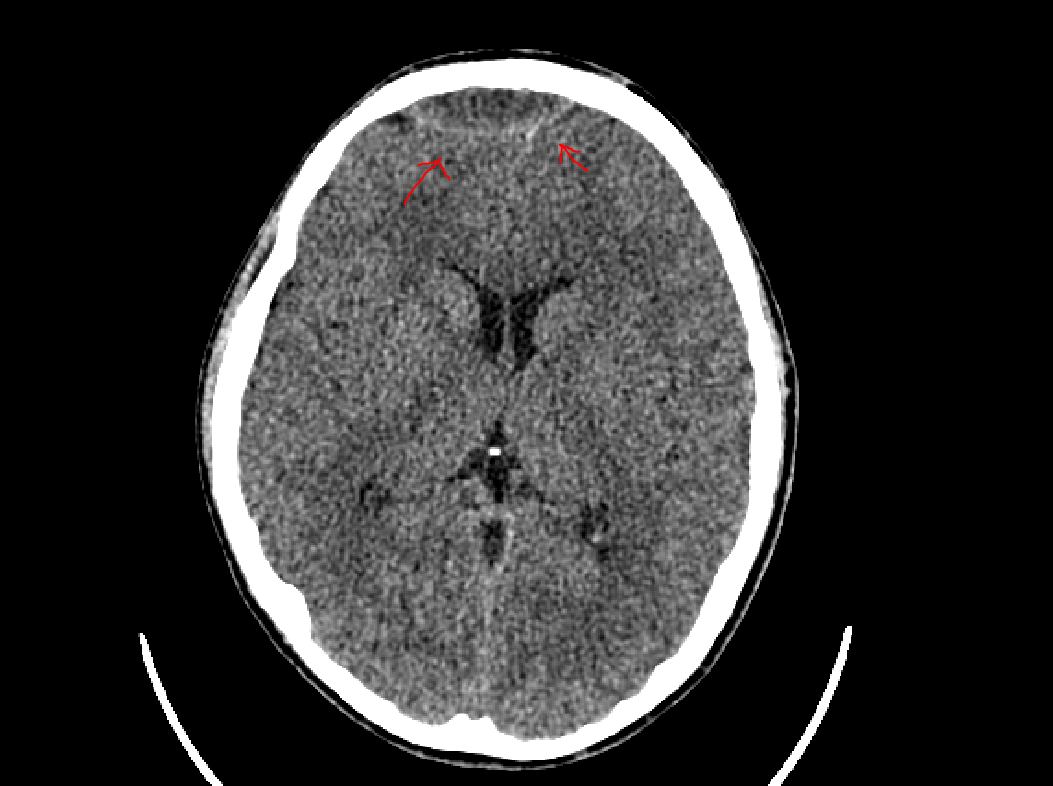 Patient presents with what appears to be either postictal state or complex seizure on arrival. Because the patient did not ever become communicative and had additional seizure activity after additional ativan, patient was intubated for airway protection and received Keppra, propofol drip, fentanyl, and empiric IV antibiotics. Patient had another seizure prompting fosphenytoin load. Patient seized again and a versed drip was started. Subsequently found to have an epidural abscess in the right frontal and concern for stroke in left frontal lobe.

Family came to the ED and noted patient with history of recent rhinosinusitis about 3-4 weeks prior to presentation and frontal forehead swelling on initial presentation at that time with complaints of headaches. They note that headaches resolved 1 week prior to presenting for seizures today. Also noted that they didn’t fill prescribed antibiotics until 1-2 weeks after they were written.

He went to the OR with ENT and NSGY for aspiration of the abscesses on hospital day 0, EEG showed mild diffuse encephalopathy (while sedated) and bifrontal slowing consistent with focal cerebral dysfunction from known abscesses. No epileptiform activity noted. On day of extubation (hospital day 1) he was very confused, agitated and impulsive (likely secondary to his bilateral frontal lesions). ID placed him on 6 weeks of antibiotics via PICC line out patient with definitive plan to stop once a follow up brain MRI confirmed no infection. Cultures grew out Strep Anginosus.

Frontal bone osteomyelitis with subperiosteal abscess formation, also known as Pott’s puffy tumor (PPT), is an uncommon but severe complication of acute frontal sinusitis. PPT is an eponym for Sir Percivall Pott who first described this pathology in 1760. Presentation of PPT is typically remarkable for fluctuant swelling of the forehead in association with sinusitis-like symptoms. It is believed that progression of frontal sinusitis to osteomyelitis of the frontal bone allows for fistula formation and subsequent infection of the surrounding tissues. There have also been a variety of case reports where PPT developed secondary to major or minor forehead or intranasal trauma, insect bite, and at least 5 case reports of PPT secondary to intranasal cocaine use. Further, some cases are of unknown etiology.

PPT diagnosis is overall more common in adolescents, likely because the frontal sinuses are not completely formed and the area is more highly vascularized. One review of literature found that between 1998 and 2018 there were 53 articles describing a total of 92 pediatric and adolescent patients with PPT.

Sinusitis describes the inflammation of the mucosal lining of the paranasal sinuses. Sinusitis is exceedingly common; it is diagnosed in an estimated 1 in 6 adults in the United States, annually. Viral etiology is most common, but bacterial, fungal and barotrauma are possible causes. Approximately two thirds of patients will recover without treatment, however life threatening intra and extracranial complications, including PPT, do arise and must be recognized in the emergent setting.

PPT should be a consideration in patients, particularly children, with a history of fever, headache and any of the aforementioned sinusitis symptoms, who also has forehead pain and/or swelling. The ‘tumor’, really a non-neoplastic abscess, is typically a fluctuant and tender mass to the frontal region with possible intracranial and/or orbital involvement. Imaging should include a contrast enhanced CT or MRI with gadolinium. CT will show opacified frontal sinuses and concurrent edema to the surrounding tissues. Anterior wall defect of the frontal sinus may also be appreciated, particularly when the suspected etiology is extension of sinusitis. An MRI with gadolinium is useful to visualize subtle intracranial extension which should be highly suspected in all cases of PPT, but particularly in adolescents who have exceptionally high rates of intracranial complications. Ultrasound is not diagnostic and plain radiographs are not sensitive.

Rapid diagnosis and treatment of PPT is required in order to optimize patient outcomes and reduce the risk of complications. Management of PPT includes systemic antibiotics to combat the infection along with surgery to drain the sinus and excise the infected bone.

In the Emergency Department, the patient should receive broad spectrum antibiotics, IV hydration, and analgesia as soon as PPT is suspected. A combination of antibiotics such as penicillins, vancomycin, 3rd generation cephalosporins, and metronidazole are commonly used as they have adequate blood-brain barrier penetration and cover the most common pathogens associated with PPT including Gram-positives and anaerobes. Patient’s can be switched to more targeted antibiotic therapy once culture results are available. In addition to starting antibiotic therapy, imaging studies should be obtained as soon as possible to confirm the diagnosis and the extent of the infection.

After imaging is obtained and the diagnosis of PPT is confirmed, otolaryngology and neurosurgical consultation should be obtained as surgery is required to drain subperiosteal abscesses, debride unsalvageable tissue, and restore sinus drainage. Endoscopic intranasal frontal sinusotomy is the preferred surgical treatment as it is associated with significantly less morbidity and mortality, but the severity of the disease may necessitate that more invasive procedures such as craniotomy are performed. After surgery, patients will require prolonged IV antibiotic therapy for 4-8 weeks as they recover.

The prognosis of PPT is often favorable as earlier recognition, diagnosis, and treatment with a combination of antibiotics and surgery has reduced the overall mortality rate from 60% to 3.7%. Additionally, the majority of patients with PPT will recover without any residual neurological deficits. While outcomes are improving and the prognosis is favorable, if the patient presents late in the course of the disease with severe complications, or if diagnosis and treatment are delayed, then morbidity, mortality, and overall prognosis will be worse.