Patient brought in by EMS. Per EMS, family saw the patient last normal at 8 AM. Heard a loud thud at approximately 11 AM this was the time of thought to have loss of consciousness. Found to have multiple types of medications including losartan, omeprazole, Prozac, doxepin, amlodipine, prednisone with unknown doses and unknown amounts of ingestion. EMS notes blood glucose was in the 80s, was given Narcan with no change in mental status. GCS 8. Due to mental status, no history from patient.

Patient arrives with GCS of 5, intubated for airway protection and so the patient can be given oral charcoal given EKG changes and reports of TCA overdose as well as calcium channel blockers. Patient is given 3 A of IV sodium bicarb. Written for both oral potassium (potassium not absorbed charcoal) as well as IV potassium. Discussed the case with toxicology. They recommend to hold bicarb drip as QRS narrowed after bolus and has maintained narrow morphology. If QRS goes beyond 120 then can use sodium bicarb drip. Follow serial VBG’s. If pH is greater than 7.5 switch to lidocaine. 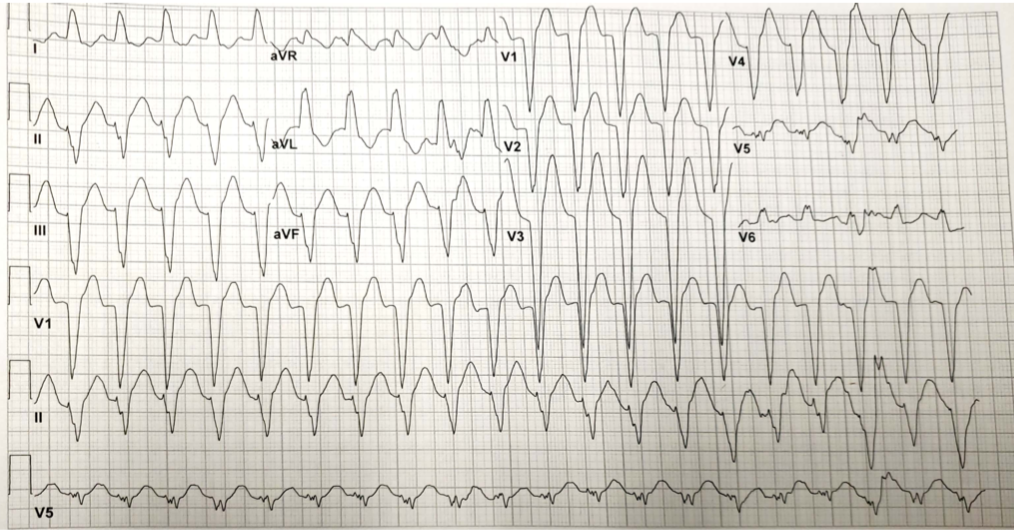 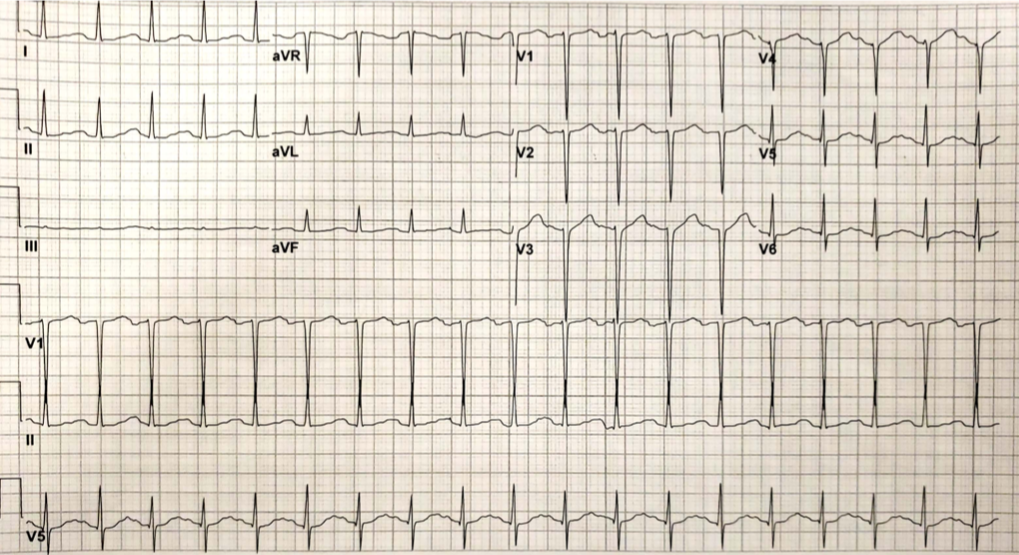 Required 24 hours of ventilator support. QRS remained stable after the ED. Patient was transferred to in-patient psychiatric hospital. She did not suffer from hypoxemic or anoxic brain injury.

Tricyclic antidepressants (TCA) were introduced in the 1950s to treat depression, but are now more commonly used as migraine prophylaxis and in the treatment of fibromyalgia, neuropathic pain, and obsessive-compulsive disorder. The shift away from using TCAs for depression was in large part due to the drug’s narrow therapeutic index, which predisposes patients to overdose. Ingestion of amounts between 10-20 mg/kg can be life threatening and signs of toxicity are clinically apparent between 30 minutes to 2 hours. Not surprisingly, TCA overdoses have a higher hospitalization rate and fatality rate compared to other antidepressants. TCAs primarily function by inhibiting presynaptic reuptake of norepinephrine and serotonin. However they also block alpha-adrenergic receptors, histamine receptors, muscarinic receptors, potassium channels, GABA receptors, and cardiac fast sodium channels producing a varied toxidrome. Patients may present with hypotension from alpha-blockade, symptoms of anticholinergic toxicity, QRS prolongation, QT prolongation, hypokalemia, and seizures. Considering the significant cardiac and neurologic effects of TCA overdose, early identification and proper treatment are essential.

TCA overdose or toxicity can be challenging to diagnose. Occasionally, the patient will endorse taking excess medication or will be able to provide a list of their medicines. However due to the possible effects in TCA toxicity, including cardiac, CNS, and anticholinergic symptoms, diagnosing an overdose or toxicity may be delayed due to the patient’s clinical status. In the acute setting, obtaining TCA serum or blood levels has little utility especially because patients have been shown to be excessively symptomatic at non-toxic serum concentrations. In the ED it is a clinical diagnosis. An EKG and serum blood glucose level should be obtained immediately upon presentation. Additionally, drug screen, ethanol, salicylate and acetaminophen levels are needed to help rule out other common coingestants. Proper management of the patient and their symptoms is paramount due to the severe complications of TCA toxicity.

Tricyclic antidepressant overdose is best managed by actively assessing the main components of the presenting TCA toxidrome and treating them appropriately. As always, the first step in evaluating the patient is assuring their airway, breathing, and circulation are stable. Frequently, patients who have overdosed on TCA’s are obtunded and require rapid intubation and ventilation. Emergency arrhythmias are managed per ACLS protocols. Once the ABC’s are appropriately addressed, you can start to work through the other possible TCA presenting symptoms. Immediate infusion with crystalloid fluids should be given in the setting of hypotension with repeat boluses as needed to increase blood pressures. In the case of persistent hypotension, vasopressers can be used if there is minimal early response to IV fluid resuscitation. As with any seizure in the acute setting, first line treatment is benzodiazepines. For prolonged seizure activity, the typical progression to keppra, fosphenytonin, phenobarbital, propofol, or possibly ketamine is the recommended treatment. Intubation is sometimes required for status epilepticus. Getting an EKG is essential to treat possible cardiotoxicity and QRS widening needs immediate treatment with sodium bicarbonate. Recommendation for sodium bicarbonate infusion is 1-2 mEq/kg until QRS correction is seen. If pH is >7.5 and the QRS is still wide, a switch to a lidocaine drip should be used. QT/QTc prolongation also needs immediate addressing to prevent fatal ventricular arrhythmias and Torsades de Pointes. If the QTc does not decrease with administration of sodium bicarbonate, magnesium sulfate (2g IV) is advised. Additionally, it’s key to correct any potassium abnormalities. In the setting of Torsades de Pointes, IV isoproterenol 2-10 𝜇g/min can be infused until the heart rate is below 100BPM or, if needed, overdrive pacing. Other ventricular arrhythmias can be managed per typical ACLS guidelines. In the setting of persistently hemodynamically unstable TCA overdose patients, lipid emulsion treatment has been shown to be effective due to TCA’s lipophilic properties. If a known TCA ingestion occured in the 2 hours prior to presentation and the patient is stable and protecting their airway, activated charcoal can be given as a chelating agent. However, plasma exchange has been shown to be ineffective at eliminating increased TCA concentrations in the blood. Finally, while TCA’s carry anticholinergic side effects, physostigmine is contraindicated in treatment of an overdose due to the increased risk cardiac arrest of TCA’s combined with physostigmine. Flumazinel is also contraindicated as it can lower the seizure threshold if the patient also ingested benzodiazepines.

While the incidence of TCA overdose is far lower than other medications, a 2004 to 2017 review of drug overdoses showed that the case fatality rate in TCA overdose was 3.98%. For comparison, the opiate overdose fatality rate was 2.79%. Opiates and TCA’s showed the highest fatality rates in a review of intentional drug overdoses. Another study reviewing cases reported to U.S. Poison Control Centers from 2000 to 2014, found 315.2 per 1,000 cases of TCA ingestion (31.5%) resulted in serious outcomes. TCAs were associated with the second-highest morbidity for all drugs used to treat depression during this period of time.

Due to the multisystem involvement of TCA toxicity, a broad differential diagnosis should be considered. While TCA overdoses are not the most common, seizure or CNS depression in the setting of widened QRS or hypotension should place TCA toxicity at the top of your differential.