Patient presents to the emergency department reporting several days of recurrent facial swelling. She states that when she wakes in the morning, starting 3 days ago, she has significant facial swelling. Yesterday there was some extension of the swelling down to her bilateral upper extremities and neck. There was some associated paresthesia. The symptoms seem to partially resolve throughout the day and then recur the next morning. Patient and family who have medical background, counseled together, and the patient has taken doses of Zyrtec, and 1 dose of prednisone today without resolution of symptoms. She denies exposure to new lotions, soaps, pets, medications, or other potential environmental allergic precipitants. She denies swelling of the tongue or throat, wheezing, visible rash, itching. She does have a history of environmental allergies. 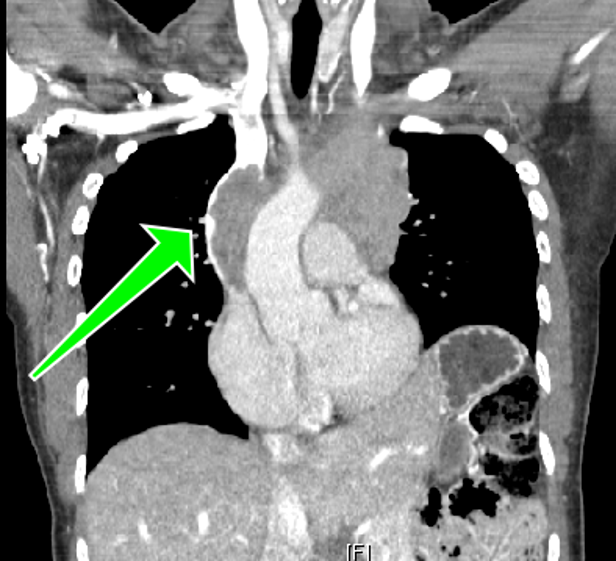 1. Large heterogeneous aggressive fungating soft tissue mass in the anterior mediastinum with direct invasion into a long segment of the SVC, almost completely occluding the vessel and dilating some collateral venous pathways in the mediastinum and chest. There is no invasion into pulmonary arteries. There is no invasion into the heart chambers. This could represent a malignant thymoma. I think lymphoma is less likely given the growth pattern.
2. No evidence of metastatic disease in the lungs, upper abdomen, or elsewhere in the chest.

Patient presents to the emergency department with symmetric facial swelling, some extension down to the arms and neck present. CT scan of the chest confirms a large mediastinal tumor, suspected to be thymoma. Discussed the patient’s care with the on-call oncologist who requested additional lab work including ESR beta-2 microglobulin, copper level, LDH, comprehensive metabolic panel. IR consult as well.

Had progressive neck and facial swelling over 3 to 6 weeks(reports to ED physician were 3 days) and presented to ED due to worsening facial swelling. She was found to have thymoma invading SVC with SVC syndrome. Had biopsy and seen by oncology and surgery. She underwent left upper lobectomy, med sternotomy, resection of malignant thymoma, resection of pericardium and 20mm Goretex graft from right innominate vein to SVC, also noted tumor involving hilum LUL and left innominate vein and SVC, and left phrenic nerve.

Superior vena cava syndrome occurs when there is obstruction of venous blood flow through the SVC. SVC syndrome was originally described as being secondary to an infection, such as tuberculosis, or a syphilitic aortic aneurysm. In 60% of cases SVC syndrome is the symptomatic manifestation of malignant tumor growth, with small cell and non-small cell lung carcinomas being the most common malignancy found. However, with the increase in mechanical device use such as pacemakers, 20-40% of SVC syndrome cases are attributed to external mechanical device migration. The most common presentation is neck and facial swelling. Paresthesias, chest and respiratory symptoms may accompany facial swelling depending on the degree of SVC compression, degree of collateral flow, and rate of compression. Consequently, edema of the respiratory system may lead to pleural effusion and shortness of breath while neurological edema may lead to visual disturbances and even death. Considering the potentially deadly complications of edema, timely diagnosis is an important indicator for patient recovery. Additionally, considering that the majority of SVC syndrome cases are caused by tumor growth, timely diagnosis is an essential aspect of cancer treatment and prognosis.

In choosing a diagnostic modality it is important to consider the severity of the patient’s presenting symptoms. The optimal choice for imaging in the ED is a CT chest with contrast which identifies both cause and location of obstruction. In cases where SVC compression is causing more severe neurological and respiratory symptoms, catheter-based venography is used to alleviate obstruction in a timely manner. Establishing the precipitating cause comes secondarily once the patient has been stabilized. In more mild cases imaging is the primary method of establishing cause and can involve CT, MRI, and ultrasound. While the SVC may not be visualized well using ultrasound, surrounding vein pulsatility can provide important information regarding the presence of a thrombus. In cases where a malignancy has been previously identified and is suspected of causing the symptoms, CT or MRI imaging are a more appropriate diagnostic modality.

Management of SVC obstruction in the ED relies on quick diagnosis and obstruction-specific treatment. Treatment can be divided into supportive and definitive therapy. A non evidence based maneuver is elevating the patient’s head to decrease the hydrostatic pressure and thus the edema. This is simple and without risk.When there is rapid acute accumulation of pericardial fluid tamponade may develop. This best diagnosed with ultrasound and requires pericardiocentesis. Monitoring the airway is crucial, and rarely patients may require emergent intubation in the ED for airway protection. Other medications used acutely include glucocorticoids and loop diuretics. While commonly seen on board questions, there is no evidence to suggest that diuretics are beneficial in treating SVC syndrome but they are still commonly used. The theory behind diuretic use is that venous pressure distal to the obstruction is affected by small changes in right atrial pressure.
More definitive treatment includes stent placement by IR. Radiation therapy for patients with SVC syndrome can result in rapid improvement that usually occurs in less than 72 hours.

Prognosis depends on the original obstruction etiology. Up to 40% of SVC syndrome cases today are the result of intravascular catheter malfunction which have better outcomes than patients with malignant obstruction. For those with malignant processes, such as an aggressive thymoma, the outcome significantly depends on the characteristic histology and complete resection of the tumor to negative boundaries. Patients with a history of cancer have an average prognosis of about 6 months. Outcomes tend to be better for those without multi-organ system invasion or history of vascular surgery or device placement.

Facial swelling is often a consequence of superior vena cava entrapment. Malignant tumors can cause symptoms to occur rapidly, while other causes of SVC syndrome such as mechanical device migration are associated with a slower onset. Other causes include thrombosis, fibrosing mediastinitis, infection, and more rarely SVC ageneosis. Thymomas account for 20% of mediastinal neoplasms, making them the most common growth originating in the thymus.