STEMI or STEMI mimic? That is the question. - The Emergency Medical Minute

stemi or stemi mimic? that is the question

24-year-old male with no past medical history presents to the ER with left-sided chest pain since 7 AM. The pain started while he was riding his bike, reliably when his heart rate was above 130 on self-monitoring. He reports pain then radiated to his left shoulder and arm. Some associated nausea, but no vomiting. Patient felt more short of breath and sweaty than normal on his routine 20-mile bike ride. Patient has had worsening symptoms over the past 3 bike rides. No chest pain at rest. Pain is now 2 out of 10. Denies any recent fevers or URI symptoms. Pain does radiate to the back. No medications prior to arrival.

EKG read as STEMI by machine however appears more J-point elevation. ASA ordered. CTA ordered to rule out aortic dissection. A repeat EKG showed worsening ST elevation in lead III and AVF along with V4 and the consulted cardiologist agreed to take the patient to the cath lab. After CTA ruled out aortic dissection verapamil, heparin, and nitro were given. Troponin returned negative and the chest pain resolved after nitro. 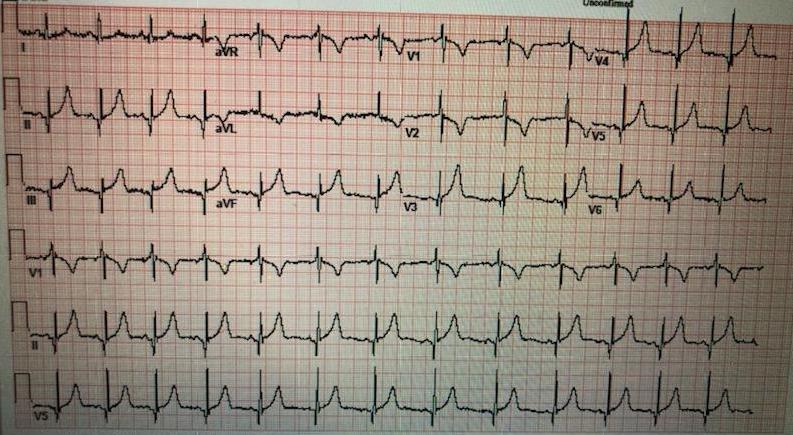 As his first description of chest pain was typical for angina, he had urgent angiography performed. Heart angiography showed normal coronary arteries with extensive myocardial bridging in the first obtuse marginal artery, the left circumflex is non-dominant artery with a large segment of severe (greater than 75%) myocardial bridging. He was discharged with exercise restrictions until seen in cardiology clinic for follow-up.

Myocardial Bridging is a congenital cardiac anomaly in which one of the major coronary arteries, which normally course over the epicardium, has a segment that tunnels through the myocardium. The heart muscle overlying the intramyocardial coronary segment is the myocardial “bridge”. Myocardial bridging most often occurs with the middle segment of the left anterior descending artery.

As myocardial bridging is not an ED diagnosis, chest pain should be worked up to rule out ACS and other significant causes. Typically, it is not until coronary angiography for ACS concern that a diagnosis of myocardial bridging is made. Further workup outside the ED by cardiology utilizing cardiac CT and doppler-flow catheters is required to confirm the diagnosis.

If a proper ACS workup is done and there is a high suspicion for myocardial bridging based on presentation, risk factors, and cardiac catheterization, most cases can be treated effectively prior to definitive diagnosis with beta blockers or non-dihydropyridine calcium channel blockers (CCB) although there have not been many studies regarding this topic and much of the treatment is based in theory. In theory, these medications reduce the heart rate and decrease contractility thus lessening the compression of the intramuscular portion of the coronary artery affected. One case study showed that two years of CCB treatment was effective in the treatment of myocardial bridging. Of note, nitroglycerin should be avoided as it can worsen the compression of the coronary artery. For patients who have symptoms that do not respond to medical therapy or demonstrate ischemia, surgical revascularization via dissection of the affected coronary artery with combination bypass grafting has been shown to be effective. Otherwise, patients will typically receive lifestyle modifications such as smoking cessation, exercise training that doesn’t provoke symptoms, and dietary adjustments.