21-year-old male presenting to the emergency department after placing a glass mason jar in his rectum 3 days ago, this was done for self-pleasure and experimentation. States that yesterday he tried having a bowel movement after taking stool softener and MiraLAX, reportedly resulted in a normal bowel movement. He has had constant, severe, diffuse abdominal pain since this morning prompting him to come to the emergency department. No vomiting. Nothing makes the pain better or worse.

He notes on the first day he had some mild rectal bleeding but none since. 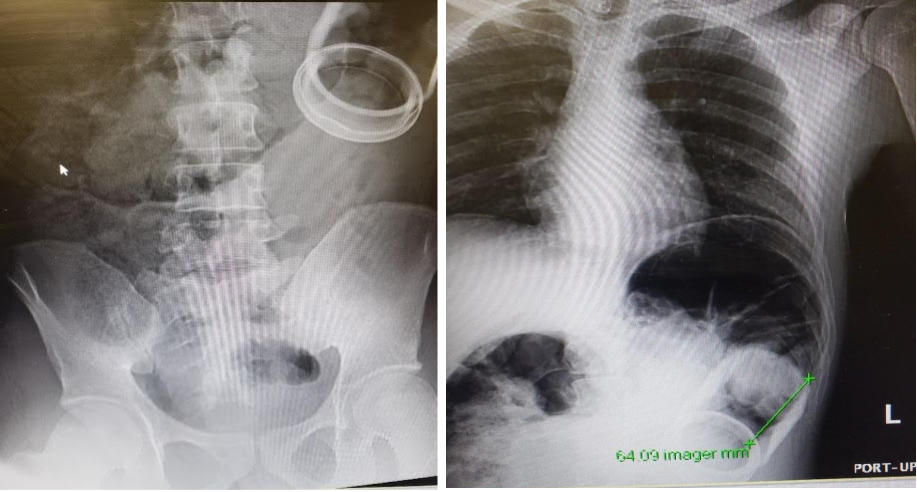 1. Large foreign body in the proximal aspect of the descending colon. The colon is dilated with air and stool proximal to this location, consistent with at least partial obstruction.

2. Appearance of trace free air under the right hemidiaphragm isconcerning for perforation.

Case discussed with general surgeon who accepted to the OR for emergent laparoscopy.

In the operating room the patient underwent an exploratory laparotomy. The jar had fully perforated through the rectosigmoid junction. There was a small amount of peritoneal contamination. The patient ended up undergoing a Hartman’s procedure with end colostomy in the distal limits of the resection at the peritoneal reflection. The patient had his diet advanced after the colostomy started working and he was discharged on post-op day 6.

The true incidence of rectal foreign bodies is not known, as many patients do not seek medical attention or management is underreported for obvious reasons. The emergency physician should be aware of the different techniques for removal and appreciate when to consult their general surgery colleagues. Most presentations of rectal foreign bodies are related to voluntary sexual gratification and are primarily males between the ages of 40 and 60 years old. Cases of involuntary non-sexual foreign bodies frequently involve children or mentally ill patients.

Considering the sensitive nature surrounding rectal foreign bodies, delayed presentation is common and patients may not be forthcoming with details. Therefore, these cases require a high index of clinical suspicion and early recognition of symptomatology such as rectal bleeding, discharge, incontinence, or constipation.

Diagnosis is made primarily by history. A digital rectal exam and radiologic studies are also useful. Most commonly, a KUB x-ray is used in order to assess for free air, which would require immediate surgical intervention. Blood tests also assist in assessing for complications such as perforation. Such labs may include CBC, BMP, and lactate. Adding coagulation studies in preparation for the OR is useful for surgical colleagues. In less than 10% of circumstances where transanal removal of the FB has failed, other methods (anoscopy or surgery) may also be necessary for visualization and removal of the foreign body.

Cases of drug packing can quickly become emergent and need to be evaluated immediately. Packing materials such as condoms and plastic bags are easily ruptured, resulting in the spilling of contents and systemic toxicity. A Rectal Organ Injury Scale can be used to determine the need for surgical intervention and is rated from Grade I – V. Grade I injuries are most common and are classified by hematomas and contusions without devascularization.

It is vital to determine what the foreign body is and its position within the rectal vault or colon. While a light bulb is fragile and can cause further damage upon breaking, a thick mason jar is unlikely to break without significant trauma. The material of the foreign body can help assess for risk of hemorrhage, perforation, obstruction, or even toxic effects.

Removal attempts require sufficient sedation, lubrication, proper positioning, and analgesia with the goal of relieving pain while the patient is awake enough to bear down and assist with the removal of the object. A suitable option for analgesia is a perianal or pudendal nerve block. Positions including lithotomy or knees-to-chest facilitate removal in combination with deep abdominal palpation and manipulation.

If these maneuvers are unsuccessful, a foley catheter can be inserted past the foreign body proximally and inflated to facilitate removal. As seen in the video of Dr. Fisher below, a vacuum can be created using a cut infant bulb syringe. If removal attempts fail in the setting of the ED, surgery should be consulted. Prior to discharge, psychiatric evaluation may be appropriate as well as follow up radiologic studies or scoping to confirm absence of perforation, obstruction, or other trauma.

Most rectal foreign bodies will be removed in the emergency department, notably there is 60-75% success rate. Predictors of failed transanal removal include character of the object, current location in the GI tract, and accessibility to resources such as adequate anesthesia and minimally invasive removal tools. In cases that the patient requires surgical intervention, the foreign body is usually of greater size or fragility. Prognosis also depends on how long the object has been present as well as what the patient has done, if anything, to attempt removal. Hemorrhage, perforation, and toxicity are primary causes of worsened prognosis that all depend on the placement and character of the object. The degree of perforation and damage, in addition to the location of the foreign body can be used as predictors of failure for bedside removal.