55-year-old male with a past medical history of hypertension, diabetes mellitus type II, hypothyroidism and testicular cancer in remission presents to the Emergency Department with the chief complaint of shortness of breath and generalized weakness. He reports he was in his normal state of health the day prior. On the morning of presentation, he noted frequent non-bloody diarrhea and abdominal pain. Just prior to arrival, the patient had a witnessed syncopal collapse in front of his girlfriend.
At triage, he was noted to have a diffuse erythematous rash. He was emergently brought into the Emergency Department as the triage nurse was unable to palpate a radial pulse or obtain a blood pressure.
On review of systems, he denies any fever, headache, chest pain, vomiting, throat or tongue swelling. He denies any recent travel or any known sick contacts.

The initial concern was for anaphylactic shock given the rash and hypotension, though an inciting cause could not be identified. The patient was treated with IM epinephrine, IV Benadryl and IV Solu-Medrol as well as IV fluids for this. This did improve the rash and the patient’s blood pressure. The patient also had 2/4 SIRS Criteria (RR and HR) on presentation, so he was covered for possible sepsis with early antibiotics. Additional concern was for a vascular pathology, so CT angiogram of chest and abdomen was performed. This revealed no vascular pathology but pneumatosis intestinalis of the jejunum and stomach with venous gas in the superior mesenteric vein and portal venous system. In the ED, laboratory findings were notable for WBC – 26, Lactate – 9, Anion Gap – 17, Glucose – 522.

These CTA findings prompted emergent surgical consultation. The general surgeon agreed and took the patient directly to the OR for an exploratory laparotomy. Lysis of adhesions was performed. The small intestine was found to be edematous and distended but otherwise healthy. No anatomical obstruction was found. Post-operatively, the patient was admitted to the ICU for treatment of his diabetic ketoacidosis. His symptoms resolved and his laboratory abnormalities normalized. He was discharged directly home on hospital day 5. He was seen for postoperative follow up two weeks after discharge at which time he was doing well and noted resolution of all his symptoms. He had plans to follow up with his primary care physician to ensure his diabetes was being treated optimally. 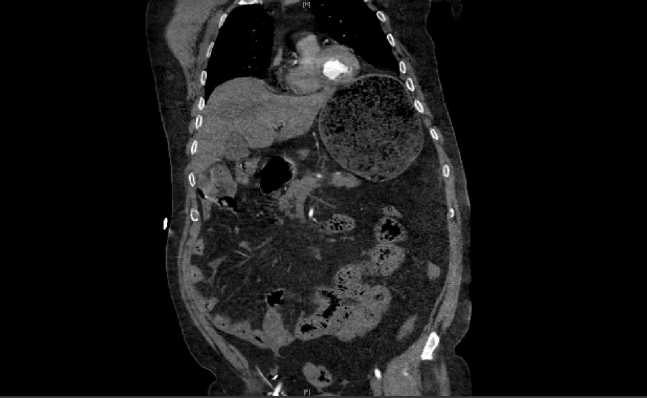 CTA Chest Abdomen and Pelvis WWO: Moderate bowel wall thickening with pneumatosis intestinalis involving multiple loops of mid to distal jejunum. There is mild pneumatosis seen in the stomach. Associated venous gas is noted in tributaries of the SMV, the SMV itself, as well as portal vein branches in the left hepatic lobe. These findings are consistent with ischemic enteritis. There is no bowel perforation observed at this time.

Pneumatosis Intestinalis (PI) is a rare condition, cited in some sources to have an incidence of 0.3%, but is not known for sure. It is characterized by the presence of subserosal and submucosal gas in the gastrointestinal tract and thought to be caused by mechanical, bacterial or biomechanical causes. The mechanical theory suggests gas dissects into the wall of bowel from luminal surface and breaks into the serosal surface via tracking along mesenteric blood vessels. The bacterial theory suggests gas-forming bacteria gain access to the submucosa. Lastly, the biomechanical theory suggests that bacteria produce excessive hydrogen gas through fermentation of carbohydrates or nitrogen through digestion of protein. Pressure from gas within the intestinal lumen increases and may be forced directly through the mucosa and become trapped within the submucosa.

PI has a peak incidence between ages 41 and 50 years and with a male to female ratio of 3:1. The small intestine was found to be the most commonly affected site (42%) followed by the large intestine (36%).

Patients may present with abdominal pain and gastrointestinal complaints of nausea, vomiting, or diarrhea. If a patient presents with diffuse tenderness, rigidity, distention, or other peritoneal signs; these are indications to get imaging. The gold standard for PI diagnosis is CT abdomen and pelvis with contrast because it can show specific areas of intramural gas parallel to the bowel wall and has greater sensitivity than plain films or ultrasound. Interestingly, CT findings including pneumoperitoneum, location of pneumatosis and cystic morphology are not predicative of clinically concerning PI. A retrospective review of 500 patients with PI identified a lactate greater than 2.0 mmol/L as the strongest independent predictors of pathologic PI, but this is highly nonspecific. Other factors such as peritonitis, hypotension or vasopressor need, acute renal failure, active mechanical ventilation, and absent bowel sounds were other predictors of PI.

Management of PI varies depending on the underlying cause and ranges from antibiotics to surgery. Interestingly, approximately half of patients are managed conservatively. Emergent exploratory laparotomy is indicated in patients with evidence of PI with either a lactate above 2.0 mmol/L, metabolic acidosis, or signs of peritonitis. In a patient that continues to be unstable, peritoneal drainage and laparoscopic bowel resections become life-saving treatment measures. For non-emergent patients that are symptomatic, the use of antibiotics, parenteral nutrition, and in some cases hyperbaric oxygen has been shown to be effective.

While complications of PI only occur in about 3% patients, they can be life threatening and may require emergent surgical intervention. Treatment is generally medical even in some cases where radiological evidence of perforation is noted but the patient is clinically stable. Complications usually involve the small and large bowel and can include obstruction, intussusception, adhesions, volvulus, and pneumoperitoneum due to cyst rupture. Additionally, the presence of portal venous gas worsens prognosis severely, and is a sign of impending transmural bowel infarction and mortality. In the case of symptomatic patients, there is a lack of evidence to support the efficacy of different treatment approaches. Approximately 30-40% of symptomatic patients will have recurrent disease within 18 months with no difference in recurrence between different treatment approaches. Additionally, while surgery can be life-saving, in some cases surgical intervention caused worsening of PI. In all cases of PI it is essential to address the underlying etiology with therapy targeting the underlying disease.