41-year-old female presenting with reported elevated blood sugars in the 200s, 3 days of vomiting and diarrhea.  She states that she vomited twice today without any blood. She states that about 2 weeks ago she was started on a new medication called Farxiga.  She has no known sick contacts, no travel out of the country and no new antibiotics. She has not consumed non-potable water. No diarrhea today.

Patient was given IV insulin bolus and drip. She was given IVF with D5 and supplemental potassium and admitted to the ICU for further medical management.

Diabetic ketoacidosis (DKA) is traditionally defined as hyperglycemia (>250 mg/dL), anion gap acidosis, and  plasma ketones. Euglycemic DKA (euDKA), is essentially DKA with a serum glucose <200 mg/dL. Euglycemic DKA is a rare entity that mostly occurs in patients with type 1 diabetes, but can possibly occur in type 2 diabetes as well. The exact mechanism of euDKA is not entirely known, but has been associated with partial treatment of diabetes, carbohydrate food restriction, alcohol intake, and inhibition of gluconeogenesis. euDKA, can also be associated with sodium-glucose cotransporter 2 (SGLT-2) inhibitor medications.  These medications first came onto the market in 2013 and are FDA approved for the treatment of type 2 diabetes, however many physicians use them off-label for type I diabetes due to their ability to improve average glucose levels, reduce glycemic variability without increasing hypoglycemia, and finally promote weight loss.

Does euDKA Exist even in Patients not Using SGLT-2 Inhibitors? 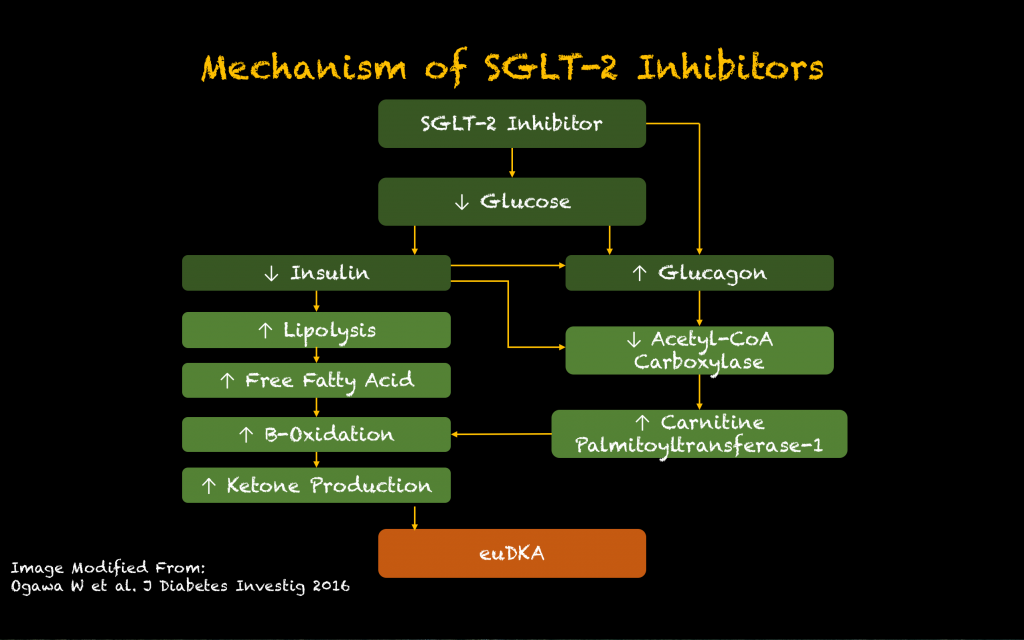 *In patients with diabetes mellitus, on a SGLT-2 inhibitor and/or carbohydrate food restriction, who present with nausea/vomiting, fatigue, or the development of a metabolic acidosis, checking a urine and/or serum ketones is critical to not miss a case of euDKA.

*The treatment of euDKA will be nearly identical to DKA: