Chest pain and shortness of breath

37-year-old male reports about 36 hours ago he was on a bicycle riding approximately 20 miles an hour when he went over the handlebars and impaled his left shoulder with a tent pole that was planted into the ground. At that time, it went into the left shoulder through his torso and came out to his back. Patient had another person with him who removed the pole. He was intoxicated on methamphetamines at the time. He is not certain if he had LOC or hit his head. He came in tonight because he had worsening chest pain and shortness of breath.

Respiratory: Lungs with diminished lung sounds on the left, patient is tachypneic
Cardiovascular: Tachycardic rate, regular rhythm
Skin: Approximately 4 inches below the left lateral clavicle there is a 1 cm circular wound, there is a similar sized wound left back about the level of T7 lateral, and appears to have some purulent material at that region 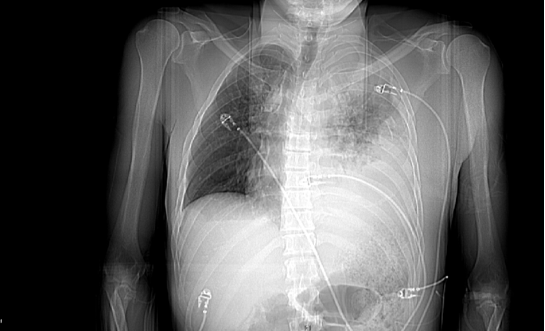 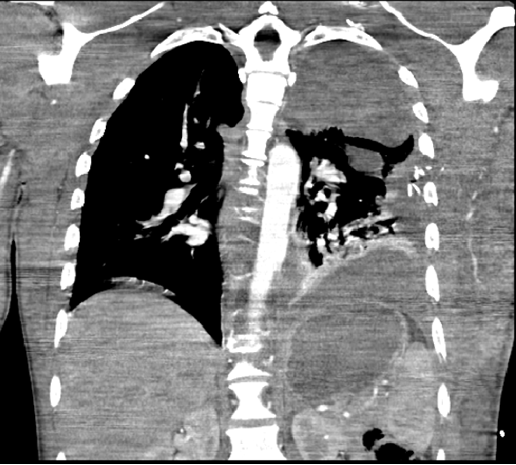 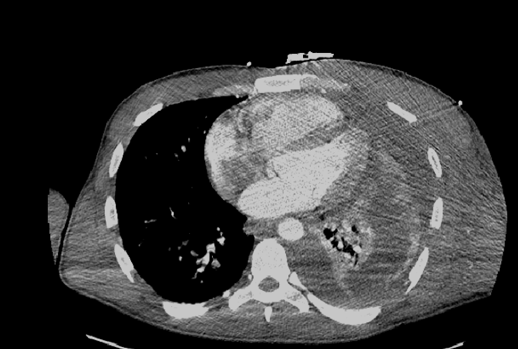 Patient was given IV antibiotics, trauma surgery consulted, and CTA imaging of the chest was obtained. Chest tube was placed in the ED with bloody purulent fluid which was sent for culture.

Hospital Day 4: Chest tubes were removed. Infectious disease recommended ongoing IV antibiotics, but patient is unable to pursue this option as outpatient as he is homeless and unwilling to stay inpatient for same. He was transitioned to oral antibiotics and signed out against medical advice; scheduled follow up in trauma clinic 1-2 weeks for wound check/staple removal.

PSP presents without any underlying lung disease when a subpleural bleb of the lung ruptures into the pleural space resulting in ipsilateral lung collapse and V/Q mismatch due to loss of the normal negative intrapleural pressure. The classic presentation for PSP is a tall, thin male between the ages of 11-30 with a history of cigarette smoking. The age adjusted incidence of PSP is between 7.4 and 18 cases per 100,000 in men and between 1.2 and 6 cases per 100,000 in women. SSP occurs in the presence of underlying lung disease, such as COPD, cystic fibrosis, and lung cancer, due to the weakened alveolar-pleural barrier. SSP tends to occur in older populations with the peak incidence between ages 60-64.

Traumatic pneumothorax can arise from blunt or penetrating trauma to the chest as well as from iatrogenic causes. Hemothorax occurs when blood fills the pleural space rather than gas. One study found pneumothorax present in 20.6% of all major trauma patients. A type of pneumothorax called a tension pneumothorax occurs with increasing unilateral intrapleural pressure causing shift of the mediastinum to the contralateral side. Tension pneumothorax has a high mortality rate if left untreated due to the nature of it causing cardiovascular collapse, therefore prompt recognition and treatment is paramount. Iatrogenic causes of pneumothorax are commonly due to transthoracic needle aspiration and central venous catheter placement.

To assess the size of a pneumothorax on an upright chest x-ray, measure from the apex of the lung to the top of the visceral pleura of the lung (thoracic cupola). Generally, pneumothorax can be classified as small (<3 cm) or large (>3 cm). For stable cases of PSP that are small (<3 cm) and asymptomatic, observation and oxygenation is appropriate with follow up chest x-ray at six hours. If the repeat chest x-ray is negative and the patient remains asymptomatic, the patient may be discharged with strict return precautions. If the patient is stable with a PSP but symptomatic or the pneumothorax is large (>3cm), then needle aspiration using thoracentesis (i.e. “pig-tail” kit) should be attempted. If this fails, whether due to persistent air-leak or otherwise, a chest tube should be placed and attached to suction before the patient is admitted.

For patients with SSP that are asymptomatic, stable, and have a small (<3 cm) pneumothorax, observation with supplemental oxygen may be appropriate for 12-24 hours. Aspiration with small-bore catheter can also be considered. Should the patient remain stable but have a larger (>3cm) pneumothorax or any symptoms then a chest tube should be placed and the patient admitted. Avoid using positive pressure ventilation on patients with SSP and have a very low threshold for admission for these patients.

For patients with traumatic pneumothorax, treatment depends on a number of factors. For open pneumothorax, a three sided dressing with a non-taped fourth side serving as valve is used to avoid occlusion and conversion to a tension pneumothorax. Should there be a tension pneumothorax, needle decompression and chest tube are indicated. Closed traumatic pneumothorax requires a bit more nuance as observation only may be indicated for very small (<1cm) pneumothorax, unchanged repeat chest x-ray, and absence of mechanical ventilation. Chest tube is indicated for patients requiring intubation, patients who are unable to be observed, or those requiring transportation. In the event a hemothorax is present, a chest tube should be placed. If more than 1500 mL of blood is evacuated immediately then thoracotomy should be considered.

Size of chest tube catheter is selected based upon the type of patient and underlying causes. A small (8-14 Fr) can be used for most spontaneous pneumothorax, with an increase to a medium size (20-28 Fr) indicated by traumatic pneumothorax or hemothorax, pneumothorax requiring mechanical ventilation, or tension pneumothorax. Larger (36-40 Fr) catheters are typically reserved for the presence of empyema. Whenever possible, a small-bore catheter (commonly known as a “pig-tail” catheter) should be considered for spontaneous and even some traumatic pneumothorax as they create less discomfort and scarring for the patient, don’t require tissue dissection, and are shown to be as effective as larger-bore chest tubes.

Furthermore, for patients who require thoracotomy it is recommended that clinicians consider utilizing video-assisted thoracoscopic surgery (VATS). It has been demonstrated in some studies that patients who have recurrent primary or secondary spontaneous pneumothorax and underwent VATS had better outcomes and a shortened recovery time. At a minimum, any patient with a pneumothorax who is discharged should be followed-up by a physician within two to four weeks and given clear return instructions prior to discharge should symptoms recur at any point.