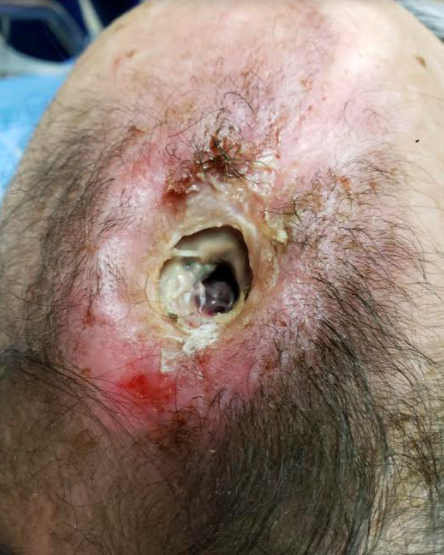 Neurosurgery was consulted, they recommended IV Rocephin and Vancomycin, wet to dry dressing, CT and MRI brain and admission to hospitalist service.

The patient underwent a right frontal craniectomy for osteomyelitis and evacuation of intracerebral abscess and subdural empyema, and a titanium mesh cranioplasty by neurosurgery. He developed left-sided weakness after surgery, an expected finding per neurosurgery and improved with dexamethasone. Psychiatry was consulted and they prescribed clomipramine for OCD and insomnia. They also prescribed Remeron for insomnia. He was found to have a hemoglobin A1C of 7.5 consistent with diabetes, so he was started on Metformin. Internal medicine wrote for Lisinopril for renal protection

Fingernails and toenails were trimmed. It was recommended he have outpatient follow-up with PCP for normocytic anemia. Discharged on hospital day 7 to a skilled nursing facility with follow-up with PCP, neurosurgery, plastics and infectious disease.

A cerebral or brain abscess is a collection of infected cerebral tissue and inflammation caused by either contiguous or hematogenous spread of organisms. It is rare, with about 2,000 cases per year in the United States. Contiguous spread typically creates a single abscess in the brain and it can be a result of untreated otitis media, sinusitis, dental infections, or pathologic skin picking as in the case described above. Hematogenous spread is typically the result of bacteremia and presents with multiple abscesses in the brain. Risk factors for this include immunocompromised state, intravenous drug use, and trauma or surgery to the cranial or spinal space. Numerous organisms can cause cerebral abscesses, although Streptococcus and Staphylococcus species are the most common offenders. Symptoms of brain abscesses can be nonspecific and difficult to diagnose. With the advent of improved neuroimaging and targeted antibiotic therapies, detection and treatment outcomes have significantly improved. Yet, approximately 10% of cases still prove fatal making the early recognition and treatment of patients with brain abscess paramount

Diagnosing a brain abscess can be difficult as the physical exam findings and symptoms are variable, nonspecific, and are often delayed in presentation. The most common symptom is headache and the classic triad of headache, fever, and focal neurologic deficit is only present in about 20% of cases. While magnetic resonance imaging (MRI) is the preferred imaging modality for early and accurate diagnosis of brain abscesses, this is frequently not the best first choice in emergent situations due to the time and cost. Computerized tomography (CT) with iodinated contrast provides a more rapid and cost-effective approach in evaluating for brain abscess in the ED, but is not as sensitive as MRI. In addition to evaluating with neuroimaging, blood cultures should be obtained to better characterize the etiology of infection. It should be noted that brain abscesses and meningitis may have overlapping presentations and performing a lumbar puncture (LP) should be cautioned when there is suspicion for a brain abscess. In fact, studies have shown that LP in brain abscess did not provide useful diagnostic information and frequently led to neurological deterioration typically due to mass effect causing increased intracranial pressure and subsequent herniation when LP was attempted leading to significant mortality rates.

The first step of management is going through the ABC’s to stabilize the patient and initiating resuscitative measures if septic. After this, a CT head with contrast should be obtained to evaluate for intracranial processes including abscess. Upon confirmation of brain abscess on imaging, successful management in the ED requires prompt initiation of empiric antibiotic therapy and neurosurgery consultation for either aspiration or surgical intervention. Empiric antibiotic therapy depends on the suspected etiology of the brain abscess and the most likely associated pathogens. In the case above the most likely etiology is a post-traumatic abscess, therefore the empiric antibiotic coverage should include vancomycin plus either cefotaxime or ceftriaxone. For post-surgical abscesses, the antibiotic therapy should include vancomycin plus ceftazidime or cefepime or meropenem. For abscesses of odontogenic, otic or paranasal sinus origin, antibiotic coverage includes metronidazole plus cefotaxime or piperacillin/tazobactam. For abscesses of metastatic or cryptogenic origin, the antibiotic therapy includes cefotaxime plus/minus metronidazole or ampicillin/sulbactam.

There is still some controversy over the use of corticosteroids in brain abscess due to the theoretical decrease in the immune response and a decrease in contrast enhancement of CT. While the quality of the literature is not optimal, corticosteroids have demonstrated decreased mortality in certain cases. Current recommendations use presence of significant mass effect on imaging to support use of dexamethasone.

The most important predictive factor for poor outcome is degree of neurological impairment at initial presentation. Other important factors affecting prognosis include, fever, severe leukocytosis (>20,000), and meningismus. The most common sequelae associated with brain abscess are seizures. In a case series of 53 patients, 12 of the patients (22.6%) developed seizures following recovery from a brain abscess. Other sequelae include recurrent brain abscess, hemiparesis, and hemiplegia. Outcomes from a systematic review with data on brain abscesses from 1970 to March 2013 revealed a decrease in case fatality rate from 40% to 10%. Additionally, patients who made a full recovery increased from 33% to 70%. Advances in treatment outcomes can be attributed to early diagnosis with neuroimaging, prompt initiation of antibiotics, and improvements in neurosurgical technique.